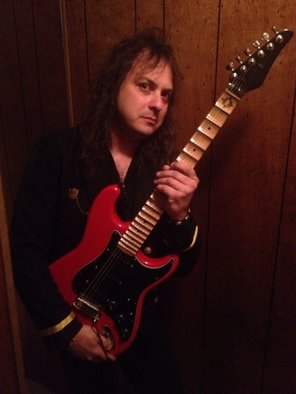 When you’re in the mood for something more than just singing over music, the work of Andy A. Sartori is surely what you’re looking for.

hey saturate their music with instrumentals and vocals that create complex, melodic tunes that command attention. They are heavily influenced by classical baroque music, so the band stands as the symphony behind Andy Sartori as the ‘maestro.’ Their music can be called neo-classical power metal, as it is melodic, technical, and commercially inclined.

The Band and Sartori himself are especially seasoned in music. The band is composed of Andy Anderson Sartori, Scott Board, Dino Castano and Michael Harris. What sets these guys apart from other bands is their music composition. “We use a lot of arrangements that you won’t find any other bands doing. Lots of vocals, lots of guitar quartets, duets and harmony arrangements.”
(CONTINUED BELOW)
Downloads:
(CLICK ON TITLES)
CASTLE OF THE LOST SOUL

ONE DISTANT HEART
​Lead man, Andy Anderson Sartori was born in Brazil, and has lived all over the globe, including London and now the United States. His sound is universal, and has had recorded music from England to Brazil. His music is also very popular in Japan. His influences include Sebastian Bach, Antonio Vivaldi, Nicollo Paganini, and Amadeus Mozart.
​
Their musical message is simply positive. Their lyrics have no political, negative, or rebellious content, so nothing but encouraging messages permeates their music. To their fans they say, “Thank you for enjoying our music. Without you we would never exist as musicians. You’re the best! God bless you all!”
​
Andy A. Sartori and his Band just finish the master version of their album DRAGONS FIRE and now they are ready to take the world by storm!
Powered by